1906:
Nuremberg hosted a "Bayerische Landesausstellung" – Bavarian State Exhibition in todays Luitpoldhain. The various exhibits were connected by a purpose-built trolley loop within the fairgrounds, using 10 open summer cars specially built by MAN. After the exhibition ended the cars were acquired by the Nürnberg-Fürther Straßenbahn, which discarded the car bodies and stored the trucks and other parts. 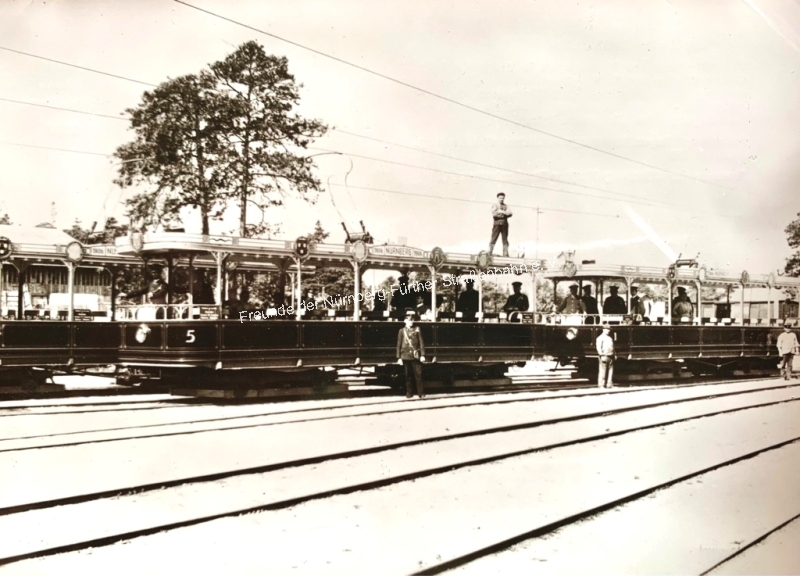 1909:
Using the existing trucks, MAN built 10 spacious new streetcars. Measuring 11 meters in length, these cars were the longest in Nuremberg. With their elegant appearance and tapered ends, they quickly became known as "Zeppelinwagen" due to resembling an airship from Graf Zeppelin, which had to perform an emergency landing in Nuremberg in 1909. 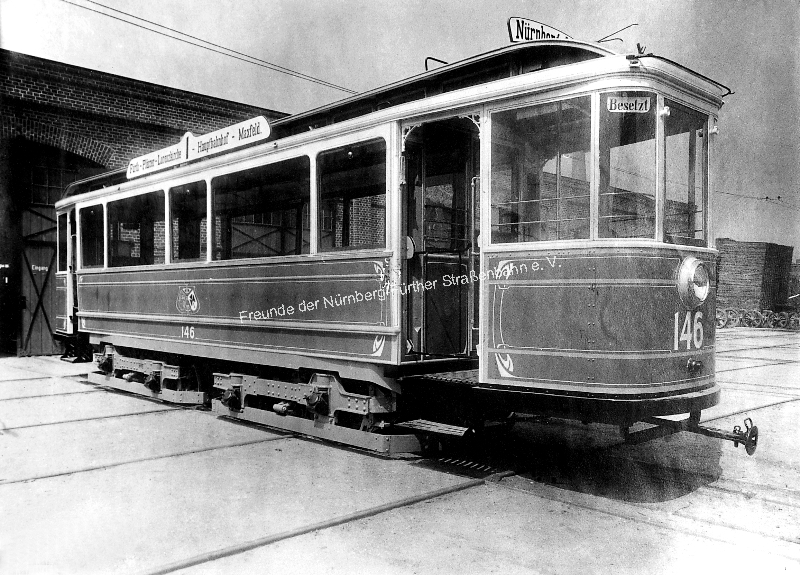 1909-41:
The "Zeppelinwagen" are operated on the network of Nuremberg. Due to being underpowered, they rarely pull trailer cars. They are mainly used on line 6, running through the cramped northern part of Nuremberg’s old town (St. Sebald). In the 1930s, the cars don’t see regular use anymore, running only during times of high demand, especially during the "Reichsparteitage" until 1938.

1941:
The "Reichsleistungsgesetz" forced many German transit companies to sell cars deemed surplus. The 10 "Zeppelinwagen", together with numerous trailer cars, were transferred to then German occupied Krakow. Other cars end up in Katowice and Poznan. The exchange with transit operators in the occupied territories did not take place in a friendly atmosphere with required spare parts often being sold at high prices. 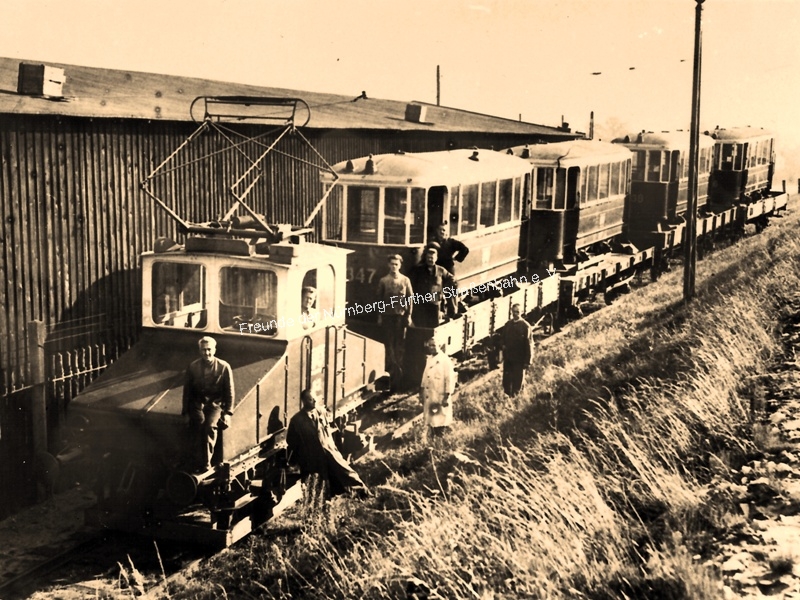 A train loaded with streetcars from Nuremberg departing for Krakow in 1941.
Picture: VAG Nuremberg)

1950er Jahre:
The "Zeppelinwagen" operate on the entire network of Krakow. The underpowered cars receive new and stronger motors, window spacing is changed and the platforms are enclosed with sliding doors. The cars are also repainted into a blue and white colors, the standard of MPK Krakow. 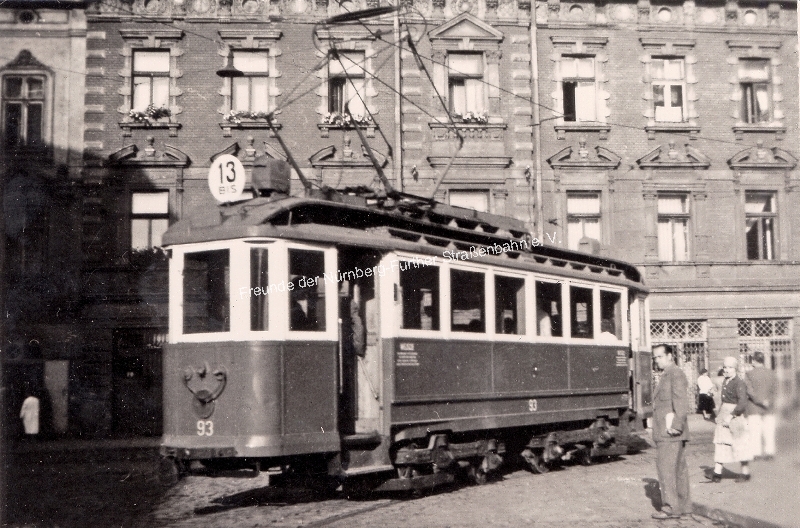 A 'Zeppelinwagen' during the last years of service 1965.
(Picture: MPK Krakow)

1970:
The last "Zeppelinwagen" was retired in Krakow. Car #89, the former #144, was rebuilt for service as overhead maintenance car #1010. A generator was installed along with a work platform on the rear part of the roof.

1976:
A member of the "Freunde der Nürnberg-Fürther Straßenbahn" discovered car #1010, the former #144 during his travels in Poland. First contacts with MPK Krakow are established. The ambitious goal is to return car #144 to Nuremberg despite being behind the then "iron curtain" of the cold war era. In 1977 the "Zeppelinwagen" became part of political discussions. 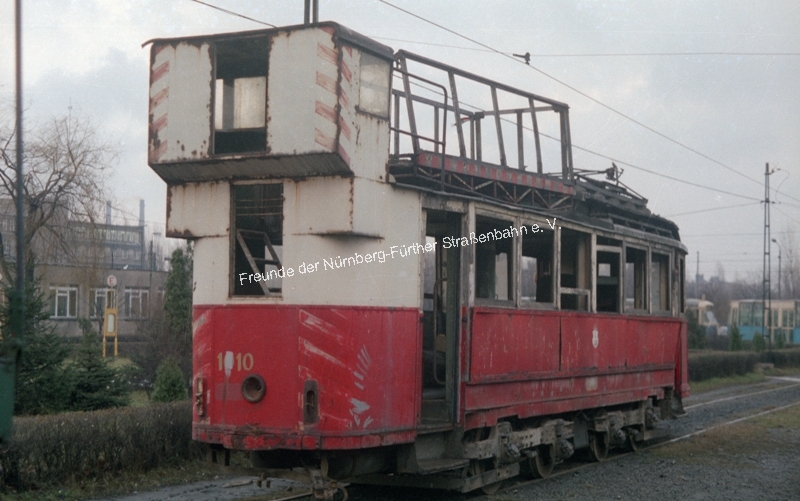 1979:
Krakow and Nuremberg become sister cities. Car #144 plays a major role; it will be the first common project of the new partnership.

1982:
Reconstruction of car #144 by MPK Krakow begins. A completely new car body is built. Sporadic visits of a delegation from Nuremberg take place during reconstruction, but communication is greatly hampered by closed borders. 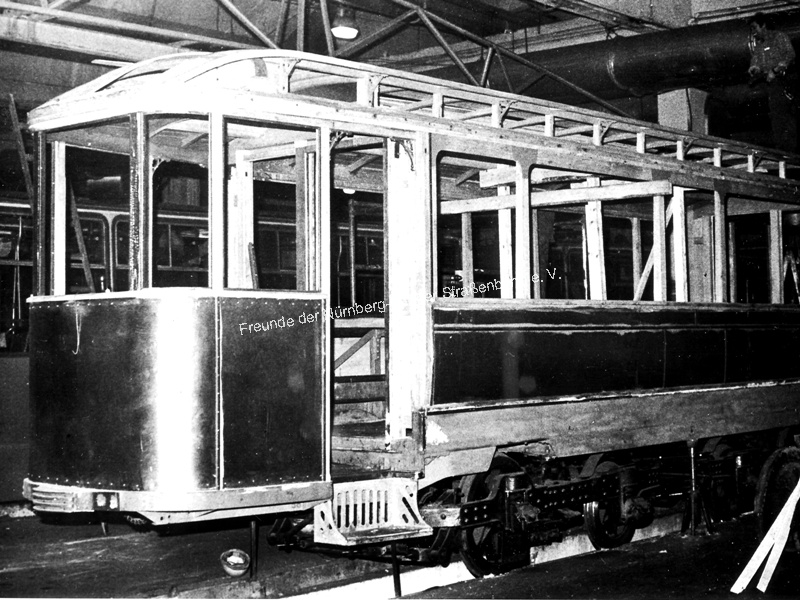 Car #144 being restored in Krakow. Picture from 1983 at the MPK Krakow shops.
(Picture: FdNFS)

1984:
Car #144 returns to Nuremberg, accompanied by festivities. Unfortunately the car cannot be certified for operation, as many components do not meet standards required in Germany. Car #144 becomes an essential exhibit at the "Historisches Straßenbahndepot St. Peter", opened in 1985. In Krakow the restoration of car #144 raises awareness towards the own streetcar history and first restoration efforts take place.

1989:
With the expanding subway network, Nuremberg has a surplus of streetcars. The good connections with Krakow lead to over 200 streetcars being sold or donated to Krakow over the following years. This gesture, gladly accepted by Krakow, led to a lasting partnership between both cities and friendship spanning generations. 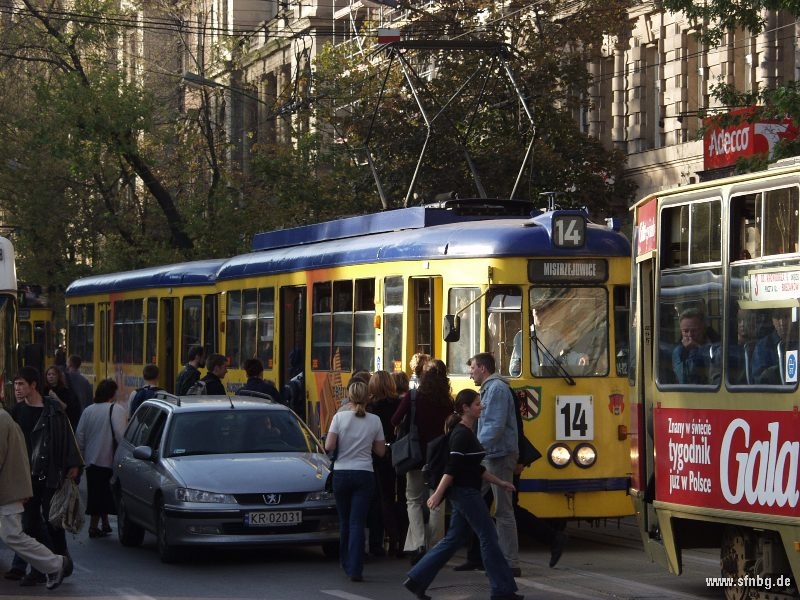 2009:
The "Freunde der Nürnberg-Fürther Straßenbahn" and MPK again start restoring historic streetcars together. This further tightens the bonds between both cities. 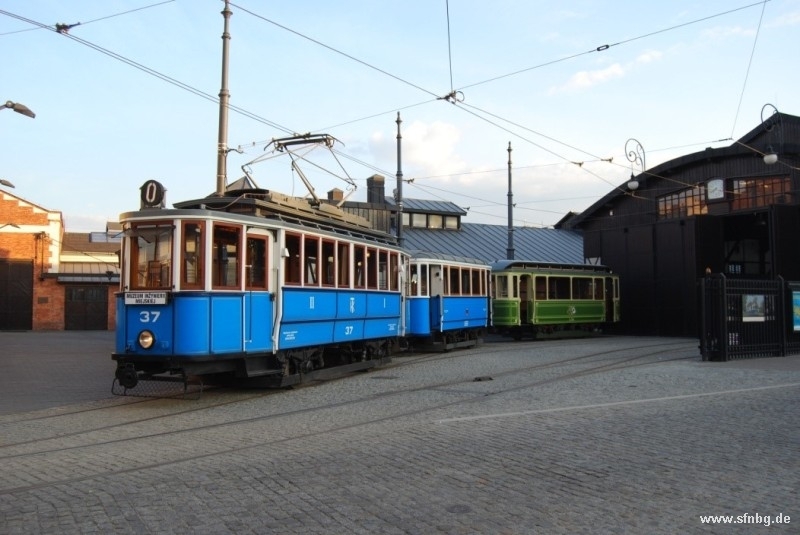 Car #336 coupled to its Krakow counterparts. The middle car also is a former Nuremberg car, sold to Krakow in 1941.
(Picture: Jacek Kołodziej, 2011)

2017:
Our friends in Krakow voice their wish to add a "Zeppelinwagen" to their own collection of historic cars – the idea of splitting the present car #144 evenly in order to create two new operating cars was born.