Car #144, the "Zeppelinwagen", restored in 1984, is an important exhibit at the "Historisches Straßenbahndepot St. Peter". Unfortunately, it does not fulfill the requirements of the "BOStrab", the rulebook governing the operation and certification of streetcars, so presently car #144 cannot be operated on the track network of Nuremberg.

Goal of the project is to create two operating cars by splitting parts of car #144 into both newly reconstructed cars. Missing parts will be manufactured by copying existing parts or based on original drawings. Original parts from 1906 and 1909 will be split up between Krakow and Nuremberg. 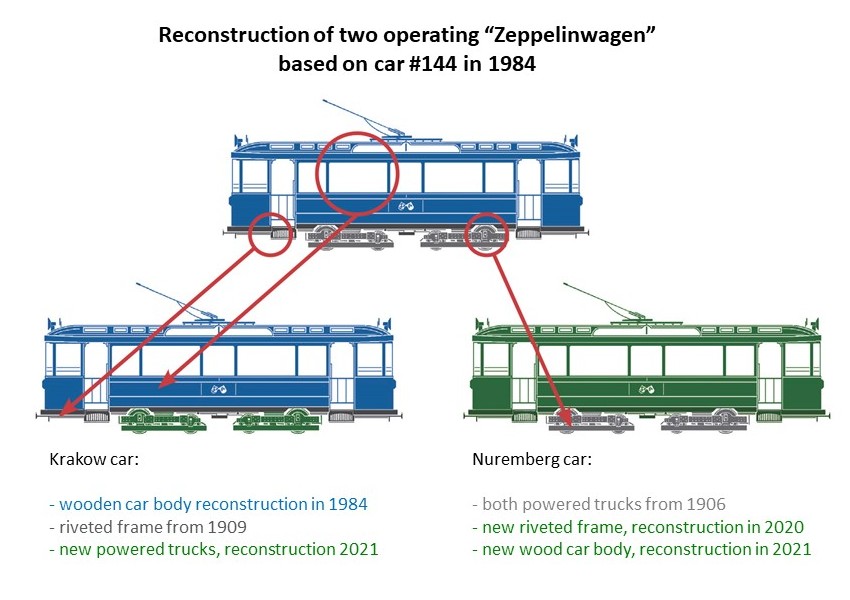 Building a new frame for the car designated for Nuremberg is one of the more demanding steps towards reconstruction. More than 2000 hours were spent on creating a complete documentation of the riveted steel frame. Only few factories that are still capable of manufacturing in this old technology remain, so we are quite lucky that Autosan S.A., located in the south of Poland, will build a new frame. Autosan already completed the same task of building a new, riveted, frame for our previous project, car #1023.

The wooden shell of the car will be built from oak according to original drawings from 1909. This work will be done by the carpentry Stryszowski in Wieliczka (www.stryszowski.pl), already very experienced in this task. Krzrystof Stryszowski showed his skills and dedication for details already during our previous projects, cars #336 and #1023. Parts, forms and profiles were measured and catalogued by our members, so that the appearance of the rebuilt car will be as authentic as possible.

Final assembly, reworking of other parts, wiring and painting will be done in the maintenance shops of MPK Krakow (www.mpk.krakow.pl), which will be working on their own car at the same time.

A summary of our previous restoration projects carried out together with our partner MPK Krakow can be found at www.sfnbg.de/projekte.